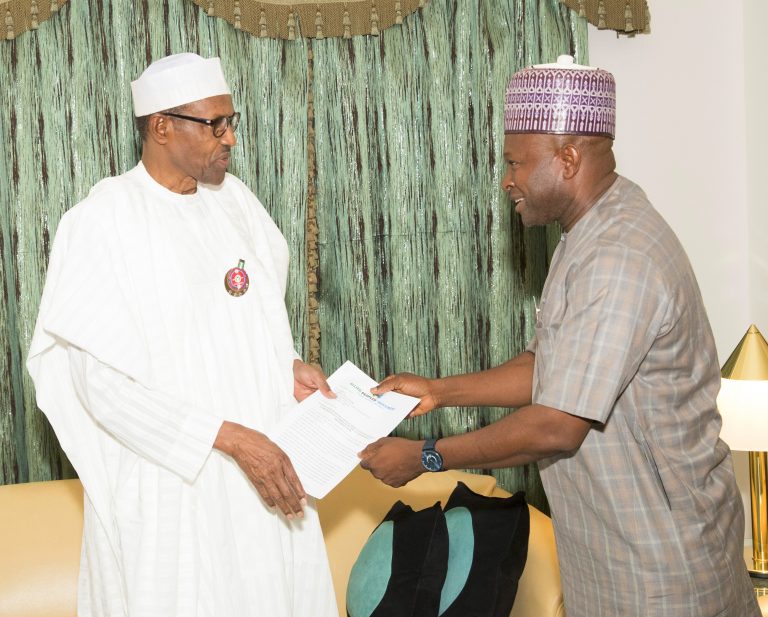 The Governor of Ogun State, Ibikunle Amosun, has  disclosed why President Muhammadu Buhari received the national chairman of the Allied People’s Movement, Yusuf Dantalle, at the Presidential Villa, Abuja.

Amosun led Dantalle to the Presidential Villa to see the president and present a letter adopting him, the president, as APM candidate for the 2019 election.

Amosun said the president, being a gracious person felt it was only fair to acknowledge Dantalle and his party, having chosen to support him in the 2019 presidential election.

“You will recall that just last week we made public that APM has adopted President Buhari as their presidential candidate. I had promised to bring the letter they had given me to present to him and that is what we came to do today.

“And you know Mr. President is a very gracious human being, he is a man with a good heart. He said if a party has adopted him, it is only fair he acknowledges the party and the chairman. That is why we are here.

“I have said that anybody that is for President Muhammadu Buhari is for me, we will embrace such party, such persons, such organisation wholeheartedly and that is what I am doing and that is what we are doing in Ogun State. Clearly Mr. President will have a massive vote in Ogun state in the coming election,” Amosun told State House correspondents shortly after the meeting with the president.

Amosun led Dantalle to the Presidential Villa to see the president and present a letter adopting him, the president, as their candidate for the 2019 election.

The visit was despite the controversy surrounding Amosun’s support for the governorship candidate of APM in Ogun State, Adekunle Akinlade, who defected from the All Progressives Congress in protest of alleged denial of the mandate to represent the ruling party.

It would also be recalled that only recently, the National Chairman of the All Progressives Congress, Adams Oshiomhole, had described as fake, candidates of APM in Ogun State guber race and Uche Nwosu of the Action Alliance in Imo, who use the pictures of Buhari in their posters.

He said only the candidates of the APC in the states had the right to do so.

Asked to comment on the statement of Oshiomhole, Amosun said:  “I don’t want to comment on that. We came for this, let’s restrict ourselves to this. I want my president to win, what else do you want? We must win that is it!”