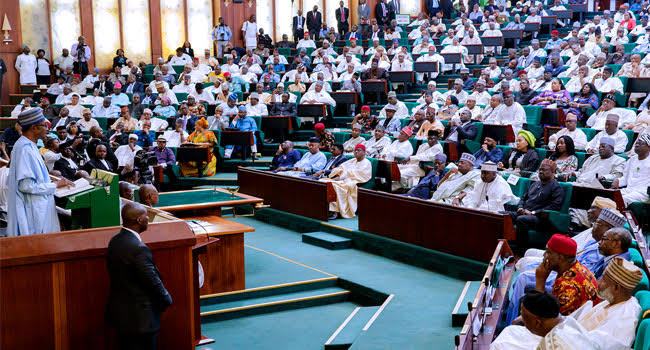 It was a rowdy session on Wednesday as President Muhammadu Buhari presented the 2019 budget of N8.83 trillion.

Presenting the document at the joint session of the National Assembly, the president proposed the sum of N2.14 trillion for debt servicing while N2.031 trillion will be for capital expenditure.

The presentation was largely characterized by so much drama as legislators of the leading opposition party, Peoples Democratic Party, PDP, and their All Progressives Congress, APC, counterparts caused some interruptions as they countered themselves on the floor of the House.

Shouts of “lies” rented the air at a point when the president was listing the achievements of his government.

Apparently embarrassed by the scenes being created by the lawmakers, the president warned:  “May I appeal to the honourable members that the world is watching us… we’re supposed to be above this.”

The warning did not have any effect as the lawmakers continued in their interruptions.

The plea by the Senate President, Bukola Saraki, for calm did not make any difference too.

Amidst the chaos, characterized by cheering and booing,  the president upon completion of the presentation, laid the copies of the budget on the floor of the House and left.