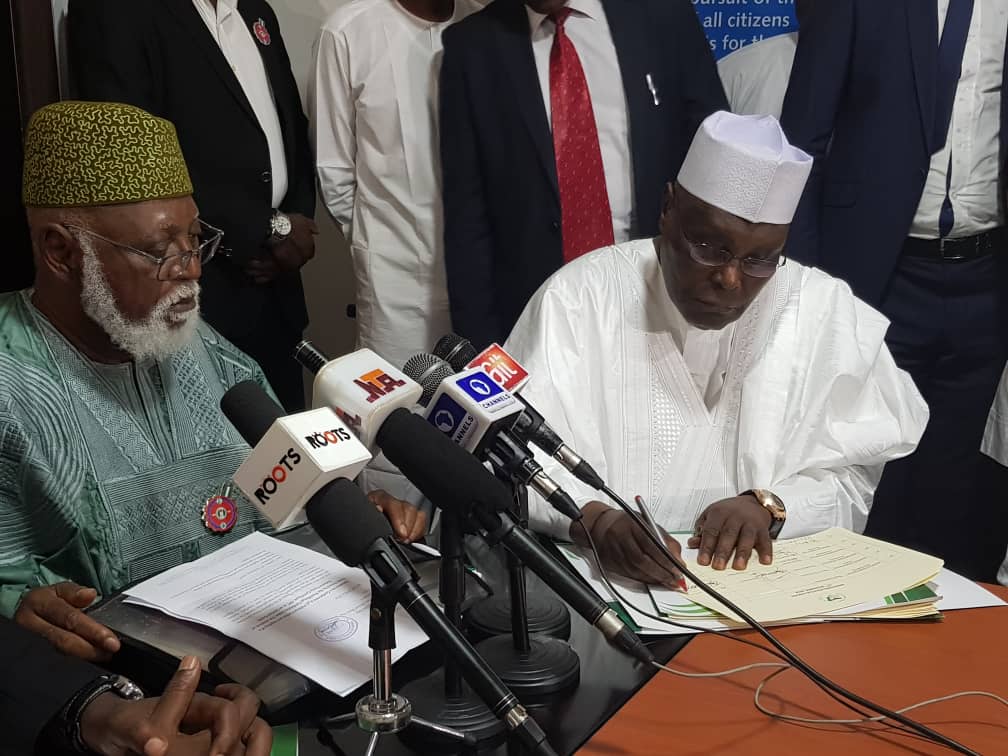 A day after President Muhammadu Buhari signed the National Peace Accord Agreement for a peaceful conduct of the 2019 elections in Abuja, the presidential candidate of the Peoples Democratic Party, PDP, Alhaji Atiku Abubakar, signed his.

Buhari signed the document at an event organised for all the presidential candidates by the National Peace Committee led by former Head of State, Abdulsalami Abubakar.

It was held at the International Conference Centre, Abuja.

Abuja who was conspicuously absent at the occasion said he did not receive the invitation to the occasion.

However, barely a day after, he visited the National Peace Committee where he signed the document.

Atiku was accompanied by his running mate, Peter Obi, and the National Chairman of the PDP, Uche Secondus, among others.

The accord signed by the presidential candidates are:

“To run issue-based campaigns at national, state and local government levels. In this, we pledge to refrain from campaigns that will involve religious incitements, ethnic or tribal profiling, both by ourselves and by all agents in our names.

“To refrain from making or causing to make in our names and that of our party, any public statements, pronouncements, declarations or speeches that have the capacity to incite any form of violence, before, during and after the elections.

“To support all institutions of government including INEC and the security agencies to act and be seen to act with impartially.

“To forcefully and publicly speak out against provocative utterances and oppose all acts of electoral violence.”