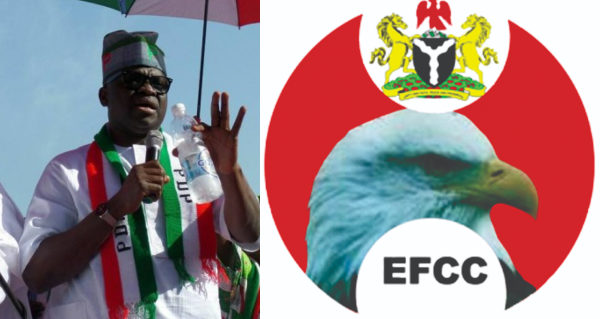 The Economic and Financial Crimes Commission, EFCC, has explained that it has put the Governor of Ekiti State, Mr. Ayodele Fayose, on the watch list because there were suspicion that he might sneak out of the country to evade investigation.

This is despite the assurance given by Fayose in a letter that he would report to the commission on October 16 after handing over government to the Governor-elect, Dr. Kayode Fayemi.

The explanation by the EFCC for putting Fayose on the watchlist is contained in the letter which it transmitted to the Comptroller General of Nigeria Customs Service.

The EFCC called on the Customs to be at alert because Fayose might want to escape through the land border, airport or seaport to evade arrest.

The letter titled “Request for Watch-listing of Persons, Case of Conspiracy, Abuse of Office, Official Corruption, Theft and Money Laundering,” reads in part:

“The underlisted suspect is under investigation in connection with the above mentioned offences and there is reasonable suspicion suggesting that he may likely leave the Country either through the land borders, Airport or Seaports in order to evade investigation.  Hence you are kindly requested to watch list and arrest him.”

Meanwhile, Fayose has criticized his being put on watch list.

He described the move as petty and political.

His reaction was issued by his Chief Press Secretary, Idowu Adelusi, on Sunday.

The statement reads:  “EFCC, when a woman is being brought to you as a wife, you don’t have to peep through the window to see her. As I said in my letter, Insha Allah, I will be in your office on October 16, a day after the expiration of my tenure.

“EFCC putting my name on watch list after notification of my coming is not only political but petty. I’m not among those who are afraid to face tomorrow. Nobody is God.

“I will remain in PDP not minding their intimidation.”