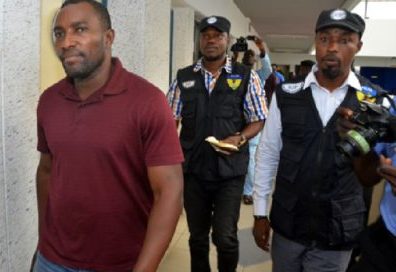 One 43 years old Augustus Akpan who threatened to kill former Vice President Atiku Abubakar, rape and kill his wife and daughters has been arrested by the police.

He is already confessing to the police the real reason for his action.

The suspect who was paraded in Abuja on Wednesday told the police that his unsuccessful efforts to extort money from Atiku who is also a presidential aspirant on the platform of the Peoples Democratic Party, PDP, led him to the threat.

It would be recalled that Atiku had recently raised the alarm that his life and those of his wife and daughters were being threatened.

He said the threat messages were sent as text to him, his wife and daughters, warning him that he should drop his presidential ambition.

The threat message reads in part:  “Turaki Atiku, we are watching you and your family, we ask you right now to withdraw from the race for Presidency, we will kill, rape your wife and daughters. That your ambitious and black daughter Maryam who worked at CBN and left because we were going to mess her up. We will molest, rape, deform her and kill her….”

Akpan, however, ran out of luck when the IGP Intelligence Response Team, IRT, operatives led by DCP Abba Kyari, begun investigation into the case.

Akpan was said to have been arrested at the Toll Gate area of Lagos-Ibadan Expressway, Lagos.

He was said to be trying to escape arrest when he was caught.

In his confessional statement, he was said to have warned Atiku not to contest against Buhari in 2019 presidential election to divert attention from his real motive.

He said the real intention was to extort money from Atiku and having failed, he resolved to threaten him.

Akpan was said to have confessed to being a professional fraudster, and speaks fluently, English, Ibibio, Russian and Portuguese languages.