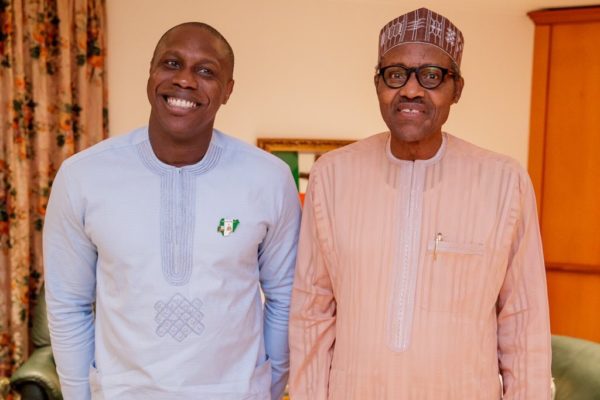 Olajuwon Obasanjo has declared that his support for President Muhammadu Buhari in his second term bid as president of Nigeria has not spoilt the relationship between him and his father, former President Olusegun Obasanjo.

The younger Obasanjo, who despite his father’s campaign against Buhari’s second term bid, openly declared for the president is the National Coordinator of Buhari Youth Organisation, BYO.

Speaking with journalists on Wednesday, he said politics was meant to unite and not divide.

According to him, despite his support for Buhari, the relationship with his father remained cordial.

His words:  “I’m here as an individual, adult, and someone who believes in this government. Politics can’t separate me and my father. We are still one loving family; our relationship is cordial.

“Politics is meant to unite us. It is important we rise above ethnicity, religious bigotry, and primordial sentiments.”

Stressing his support for Buhari, he said the president was a man of integrity.

“Buhari believes in promoting Nigerian youths which is the basis of forming this association, BYO.

“This government has empowered the youths to go into farming and other entrepreneurship.

“This government is laying a good foundation for an expanded economic base and infrastructure development,” he said.

It would be recalled that former President Olusegun Obasanjo has been in the forefront of the campaign against Buhari.

In an open letter, he had criticized the president and warned him not to stay in office beyond 2019.

He described his administration as a failure, saying the president had contributed to the hardship of the people of Nigeria.

He has also supported the candidature of his former Vice President, Atiku Abubakar, of the Peoples Democratic Party, PDP, against Buhari.