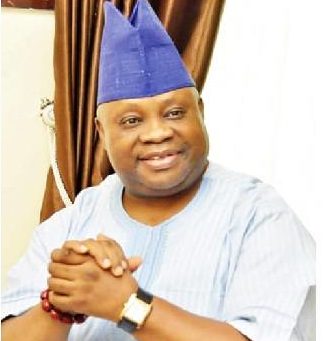 The National Chairman of the Peoples Democratic Party, PDP, has warned that there would be a national crisis except the  Independent National Electoral Commission, INEC, declares Senator Ademola Adeleke as the winner of the governorship election of Osun State.

Ademola is the candidate of the PDP who won the highest vote in the election which was held on Saturday.

INEC however declared the exercise as inconclusive, stating that there were malpractices in some parts of the state.

Secondus said his party would not accept anything less than the declaration that its candidate won the election.

According to him, it was clear that Ademola Adeleke was victorious.

Secondus said in a statement from his media office on Sunday signed by Ike Abonyi that the Chairman of INEC Prof, Mahmood Yakubu, should be held responsible for brewing crisis in the country ahead of 2019.

He accused Yakubu of trying to satisfy the agenda of his appointees.

He warned that “if what they did in Ekiti and Osun states elections are rehearsals of what they are planning for 2019, there may be no Nigeria and INEC and APC should be held responsible.”

He also drew the attention of the nation’s security apparatchik to the possible threat to peace and oneness of Nigeria through rigging of elections by a “supposedly independent electoral umpire.”

“What other evidence do the democratic watchers and security agencies need to establish obvious bias from INEC when the commission’s administrative officer caught destroying result sheets in Ayedade local Government àrea where over a thousand votes belonging to PDP were removed confirmed acting on the instruction of his superior officer.

“What will President Buhari be telling democratic world at the UN when back home he has brutalized all agents of democracy and has been unable to conduct a simple state bye election,” he said.

Secondus described as shameless, INEC’s alleged taking instructions from the APC and deciding to declare the result inconclusive when it was obvious to all watchers that the PDP candidate won the election.

He praised the people of Osun for being vigilant and protective by arresting a fraudulent INEC official.