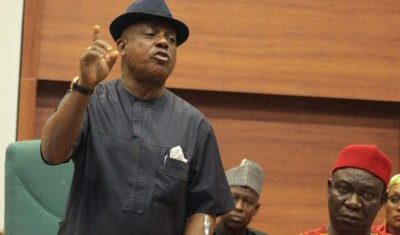 The National Chairman of the Peoples Democratic Party, PDP, Uche Secondus, has warned the Inspector General of Police, Ibrahim Idris, not to make the policemen that invaded the residence of elder statesman, Chief Edwin Clark, scapegoats.

Secondus gave the warning on Friday in a statement issued by his media aide, Ike Abonyi.

He said the police had only acted in line with the characteristics of the current police force in the country.

According to him, since Idris would have taken the credit if the policemen had discovered arms in Clark’s residence, he should also take the blame for their action.

“The IG is trying to play smart by sacrificing the operatives when he would have owned up and taken the credit if they had succeeded in their illicit mission.

“What we are seeing is the image of an administration that has little or no regard for rule of law and human rights and operatives cash in on it at will,” he said.

Four policemen, on Tuesday, invaded the residence of the Ijaw leader, Clark, allegedly in search of arms kept illegally in the building.

After a search which lasted one hour, they found nothing incriminating.

In the midst of the condemnation that greeted the action of the police, the Inspector General of Police dissociated himself from the raid, saying that the men carried out the duty without approval.

The Inspector General of Police has since tendered apology to the Ijaw leader.

A probe was carried out and three of the policemen were dismissed while the fourth one was suspended.

The informant, whose information led to the raid, it was said, would be arraigned for giving wrong information.

Reacting to the dismissal of the officers, PDP national chairman said they were only treated as scapegoats.

On a general note, Secondus said the invasion of Clark’s residence was a clear indication that the present administration did not have respect for the senior citizens of the country.

The invasion, he said, was an exhibition of “the rascality of this government in abusing human rights with the IG as a major culprit forgetting that they would not be in power forever.”

“History is recording all the atrocities of this government and time would come when every actor would be made to answer for their roles in one way or the other,” he said.