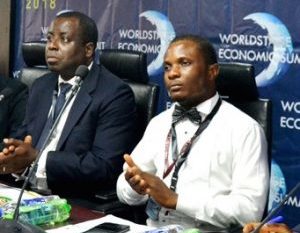 Agriculture is a very good option for Nigeria in its bid for a secure economic future and self-sustenance, Associate Professor, Department of Economics, University of Lagos, Dr. Babatunde Wasiu Adeoye, has declared.

He however said that the agricultural sector of the country was faced with numerous challenges that needed to be tackled.

Adeoye made the declaration on Tuesday in a paper he delivered at the WorldStage Economic Summit 2018 with the theme: New Sources of Economic Strength to Make the future Happen.

The event was held at the Event Centre of the Nigerian Stock Exchange, Lagos.

He also listed investment in tourism and solid minerals as other ways out of the nation’s economic woes.

Represented by Onyebuchi Iwegbu, Adeoye said:  “The agricultural sector remains a viable option for Nigeria in which it can produce her total demand internally without necessarily importing any of her final produce.”

He said to find solutions to the challenges would amount to taking Nigeria out of the woods.

He cited the example of Brazil which in 2012, enhanced the value chain in agricultural production.

According to him, the result was the generation of 16 million new jobs.

The country, he said, also became a producer of global agro processed commodities which included sugar, ethanol and oranges.

“Their value chain developed due to the improvement in the availability of seeds, soil fertility, better use and provision of technology and finally, improvement in research and innovations in the sector,” he said.

He added that the tourism sector was another gold mine waiting to be explored.

“Tourism has the potentials of stimulating output and as such act as a strong force to stimulating and sustaining growth,” he said.

He added:  “Nigeria’s tourism contributed about $1.5 billion, a hope to anchor on in terms of future output expansion sector dependants. For the sector to become a centre of attraction and growth driver, several actions must be taken by relevant stakeholders in achieving this.”

He said with serious investment in technology, hotels could better market their services and tourist centres could effectively enhance their businesses.